Tiara Joy
Mukilteo, WA, United States
I'm a mid-late twenties female that's just trying to get my life going in the right direction in all aspects. This blog will follow me thru all my thoughts no matter how silly, serious, funny or sad.

I remember sitting on the toilet staring at that little stick.

I remember the absolute thrill and the absolute, all encompassing terror that washed through me.

I stared at that stick for a good minute or two making sure that I was really seeing two lines. Trying to see if my eyes were playing tricks on me.

Then I realized I had to tell Cory. Crap.

We were trying. It shouldn't be that scary. We knew this would happen eventually.  What better timing? Our friends were expecting! This will be fun! right?

I walked out of the bathroom shaking and debating how to go about this. I wanted to do something cute and memorable but I also knew I couldn't keep it in. So I walked right up to him as he was sitting on the computer in the dining room.

I asked him if he wanted to do a shot. Yep. I said " hey babe you want a shot of jagger? or Fireball?"

He looked at me like I was crazy and said no. I then told him we have all these half bottles in the freezer and someone needs to drink them and it's not going to be me. Then he laughed, looked at me and said "what are you pregnant or something?"

This was it. I had to just say it. "Yep." It took everything in me not to start laughing and crying. He didn't believe me and I had to tell him I was dead serious as I was hysterically laughing. He still said no way and I had to pull him into the bathroom and show him the test as I was shaking the whole time.

His response was really nothing to write home about. I think he said oh crap once or twice and that was it. I got radio silence for a day or two while he processed this Earth-shattering news. I know how he processes so it was ok. I did my best to not just jump into BABY mode and give him time to take it all in.

Two weeks later he was in the kitchena nd popped his head out with a big goofy grin and looked me straight in the eye and said, " This means I get to take the baby to it's first ever Monster Truck show right?"

"Yes, darling. You get to be there for the first of EVERYTHING!" And with that he was done processing and was ready to be excited!

It's been some time since I have said hello to this little blog of mine.

The last 8 months has changed my life in so many ways and has kept me so busy and yet I found myself remembering this little corner of the internet that I call mine.  I had so many well intended posts and so much news to share and at the same time I just couldn't bring myself to write about any of it.

In May of last year we decided to no longer NOT try to get pregnant. We thought it would take some time and why not just let nature take it's course?  In June we found out that our very dear friends were finally pregnant after a long time trying and we couldn't be more excited for them! We celebrated their news while out at the bar to listen to Cory's band play and that night we celebrated some more.

We went about our lives for the next few weeks although I was feeling ridiculously tired all the time. I was needing to pull my car over and take naps in parking lots just to get safely home. I knew something was up but I still had a few weeks before I would know what was going on.

Fast forward to about June 30th and I knew something was up. I told Cory that I would gladly be the Designated Driver for our 4th of July festivities and we went about our holiday weekend hanging out with friends, blowing stuff up and ended with a little trip over the mountains and to Ellensburg to say hi to Cory's brother and family.

On our two hour journey I started to get car sick and wasn't feeling well at all. I felt like I needed to just sit on solid ground and breathe fresh air and maybe take a nap or two. We made it, barely. We had a little BBQ that night and ground beef hamburgers was disgusting to me. I just couldn't stand the texture and it tasted so weird to me no matter what I slathered on it. So I fed the rest to the dogs and I called it a night at about 8pm.

The next day we headed home, dropped off our nephew at his mom's house and then straight home. As soon as we got home I ran to the bathroom, peed on a stick and BOOM. Our life was forever changed. 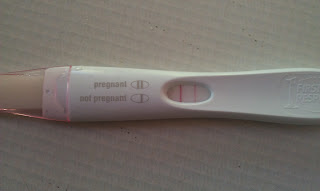